This 82-year-old woman presented with a five-year history of gradually increasing problems with memory.  Neurologic examination was unremarkable and a full battery of neurodiagnostic tests for treatable causes of dementia was negative.  Cognistat revealed multiple areas of intellectual dysfunction in a pattern typical of mild to moderate Alzheimer Dementia.

Orientation:
A score of 6 out of 12 indicates significant disorientation. This may reflect significant confusion and/or memory impairment but other possibilities include aphasia and psychosis. It is important to rule out possible medication side effects.
Attention:
A score of 8 out of 8 falls within the average range.
Language:
The Comprehension and Naming subtest scores strongly indicate acquired language impairment with a substantial weakness in Naming that can represent an isolated language disorder or can occur in the context of generalized cognitive impairment. Further medical and cognitive evaluation is indicated.
Constructions:
A score of 0 out of 6 indicates severe spatial-construction disability that needs to be further evaluated both medically and cognitively. Although spatial-construction ability varies widely in the normal population, this score indicates moderate to severe spatial-construction disability.
Memory:
A score of 5 out of 12 indicates significant memory impairment. It is important to rule out treatable causes of memory problems and/or more general cognitive decline. This patient needs to be further evaluated both medically and cognitively.
Summary:
This patient has specific areas of impairment: Orientation, Repetition, Naming, Constructions, Memory, Calculations, Similarities.
MCI Index:
The MCI Index of 5 suggests a Mixed Dementia Syndrome that is likely to impact occupational and social functioning. This patient should be further evaluated for treatable causes of cognitive decline.
Cautions:
The patient required multiple presentations in order to register the four words for the Memory Subtest and thus scores on the other Cognistat subtests must be interpreted with caution. 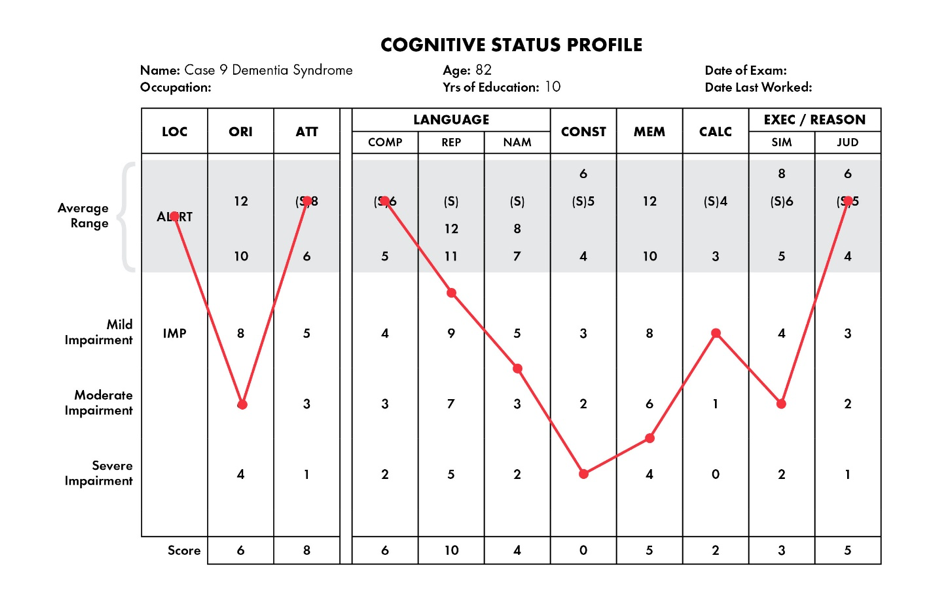